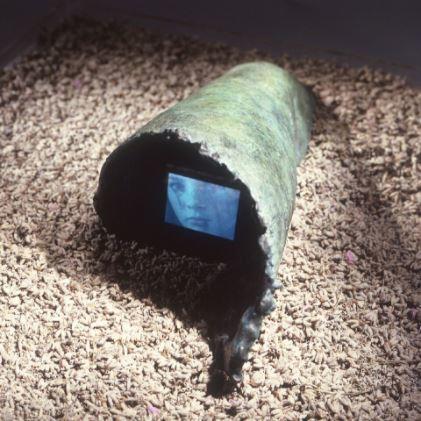 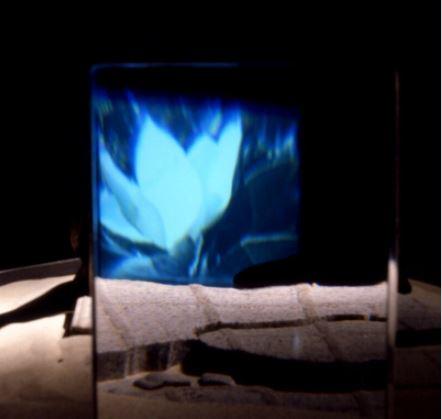 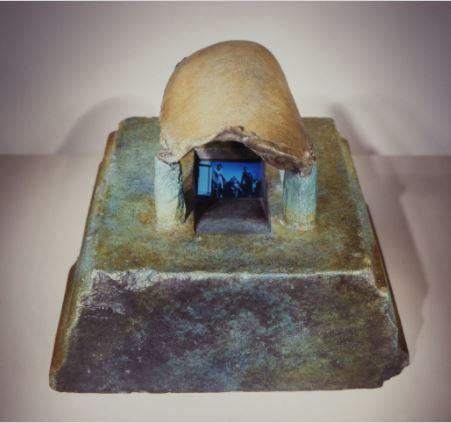 ‘I decided to use the last ten years at the end of the 20th century to look at my Self. The great Tibetan poet sage Milarepa had said that self was an illusion, that all was void and light. Einstein famously said that he was unafraid of death since there was little difference between what was inside him and what was outside.’ Liliane Lijn

In Early Events (1996-2000), Liliane Lijn brings to Summerhall five narrative sculptures, exhibited for the first time in the UK, that form part of a series in which the artist examines her psyche. Like shards of brilliant glass, Lijn discovers early memories embedded within different parts of her body.

Using highly original combinations of industrial materials and processes, Lijn is recognised for pioneering the interaction of art, science and technology with works that stretch across a wide spectrum of interests. From her early Poem Machines (1962), kinetic word drums transforming written text into vibrations and influenced by her friendship with Beat poets Gregory Corso and William Burroughs, to Liquid Reflections (1967), works with light and water and more recently Stardust Ruins (2008), which use the immaterial aerogel. Her powerful feminist prose poem, Crossing Map, published by Thames and Hudson (1983) was followed by the series of interactive Cosmic Dramas.

Liliane Lijn (1939) was born in New York, studied in Paris and lives in London. Internationally exhibited since the 1960’s, her works are held in numerous collections including Tate London, British Museum, V&A and FNAC in Paris. Lijn works across media – kinetic sculpture, film, text, performance and collage – to explore language, mythology and the relationship between light and matter. In 2005, Lijn was ACE NASA, Leonardo Network artist in residence at the Space Sciences Laboratory at UC, Berkeley. In 2013, she was shortlisted for the Fourth Plinth in Trafalgar Square. Recent exhibitions include Koans and Poems, a solo exhibition at One Canada Square, Canary Wharf (2017), As Above So Below, IMMA (2017), Beat Generation, Centre Pompidou (2016), City Sculpture Projects 1972, Henry Moore Institute (2016), RCM Galerie, Paris (2015), Images Moving Out Onto Space, Tate St Ives (2015), Ecstatic Alphabets/Heaps of Language, MOMA, New York (2012).

Please find the details below 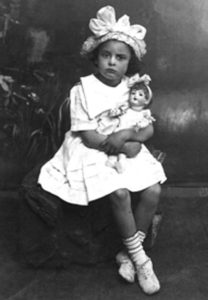 My parents belonged to a generation of Jews who faced extermination. Through their stories, as in a cracked and tarnished mirror, I see myself reflected as if I were formed before my birth by the choices, which they made. – Liliane Lijn

Liliane Lijn’s film, Look A Doll! My Mother’s Story (1994-99) is screened in conjunction with the exhibition Liliane Lijn: Early Events: Five Narrative Sculptures, and in response to Edinburgh Festival’s theme “to heal the wounds of war.” The film screening aims at extending the dialogue between generations and especially between mother and daughter, as an enactment of oral tradition and memory.

By exploring her mother’s childhood in Russia and Poland, Lijn evokes in intimate and moving detail the history of a Jewish woman who lived through the panic years preceding the 2nd World War and the excruciating reality of family life for the survivors of the Holocaust. Using interviews, photomontage and archive film clips, Look A Doll! My Mother’s Story is a film essentially about forced exodus, the restlessness of the rootless, those who have lost everything, even and most painfully their past.

Following a dream, in which she saw her mother fall from their collapsing home, Lijn had started to interview her on tape in 1994. ‘I have lost everything,’ she thought either during or just after the dream, ‘even my name’ and she renamed herself Sylvana Bismark. This, Lijn then decided, was to be the title of her autobiography. When she began to write, she realised she knew very little about her origins or her parents. From this belated interest came the limited edition, hand-bound and self-published, Her Mother’s Voice (1996-98), and having completed that artist’s book, Lijn wanted to see what would happen if she were to film her mother and ask her to tell the same story…

Made with the support of London Film and Development Agency

The panel will unearth the history behind Liliane Lijn’s works in the exhibition, Early Events: Five Narrative Sculptures, and her film, Look A Doll! My Mother’s Story. By looking at how certain, mostly traumatic, events in Lijn’s life affected her artistic practice, the discussion will raise questions of how memory is stored in our body, transforming from psychic to physical trauma and how a dialogue between generations, in this case between mother and daughter, may stand as an enactment of oral tradition and memory and also be transformed into art.