This is Hull! Rock Against Racism 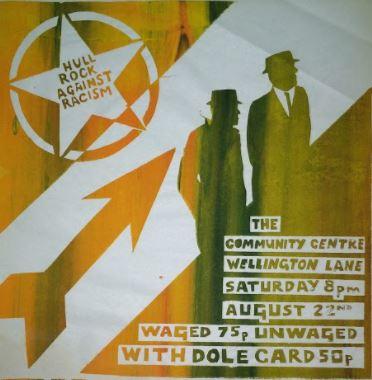 From fly-posting to picture frame, from street to gallery, Richard Lees‘ This Is Hull! Rock Against Racism Posters is a visually stunning retrospective of original silk screen prints, representing one community’s fight against racism.

Ten miles East of England, Hull is sometimes out of step. Hull Rock Against Racism got started in 1979, a bit after everyone  else, when community activists, grassroots anti-racist campaigners and musicians (including Roland Gift) came together to promote regular RAR gigs with local bands in the heart of West Hull.

With production runs of around 250, the prints were fly-posted all over Hull, often in blocks of 4 -8 posters per site, creating a powerful and sustained anti-racist street art presence in the city, just as important as the events they promoted.

The bands and the community centre have gone but the posters are reaching out to new audiences on a UK tour to Hull, Manchester, London and now Edinburgh, with a message loud and clear: we beat the racists then – we can beat them now!
Richard Lees is a print- maker, writer, trade union activist and the chair of Hull and East Riding Stand Up To Racism. His most recent screen print projects – Velvet Rope and McCarthy Iconoclast – are being previewed this year in Hull, 2017 UK City of Culture, before going on a UK tour. For further details visit www.richardleesprints.co.uk