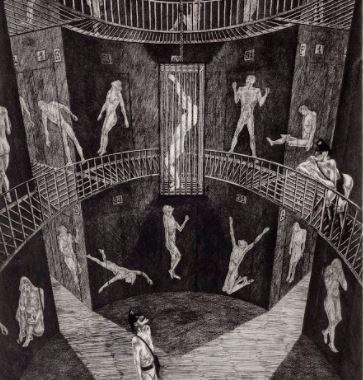 The Austrian aristocrat Baron Rudolph von Ripper was an internationally acclaimed printmaker and painter and a contemporary of Otto Dix, George Grosz and Käthe Kollwitz during the first half of the 20th century. His masterwork Écraser L’Infâme is a portfolio of sixteen prints documenting that epoch, from the collapse of the Austria-Hungary Empire into which Rudolph von Ripper was born (1905) to the rise of fascism, and his suffering at the hands of the Nazis on account of his ‘degenerate art’ at Berlin’s Tempelhof Prison and Oranienburg concentration camp.

Eyewitness artists’ accounts of the brutality endured by victims of the Third Reich are extremely rare and increasingly relevant to the turbulent politico-socio times of our 21st century.

Pursued by the Gestapo, Rudolph von Ripper fled to the USA in 1938. Fame followed after Time magazine illustrated its January 1939 edition with a print from Écraser L’Infâme: ‘Hitler Plays the Hymn of Hate’. He was awarded Guggenheim Fellowships and his work was exhibited in America under the auspices of the Bignou Gallery, Picasso’s dealer at the time. Time’s editorial compared ‘the artistry and anger that fuelled von Ripper’s work’ with Francisco Goya’s etchings of the Napoleonic War and George Grosz’s images of the First World War.

Sian Mackay was born in Edinburgh. Whilst working as a journalist in Palma, Mallorca, she was offered a file of letters and photographs found abandoned at a villa formerly owned by Baron Rudolph von Ripper. Astonished that the file had survived for half a century, she set off on an eight-year-long research trip to resurrect this important artist and war hero in her biography Von Ripper’s Odyssey, upon which this exhibition is based. In recent years she has been the recipient of awards from Creative Scotland and a residency at Yaddo Artists’ Retreat in the USA.

Sian Mackay will be at Summerhall to sign her book, discuss Rudolph von Ripper’s life and art and to guide interested visitors on a tour of the exhibition.